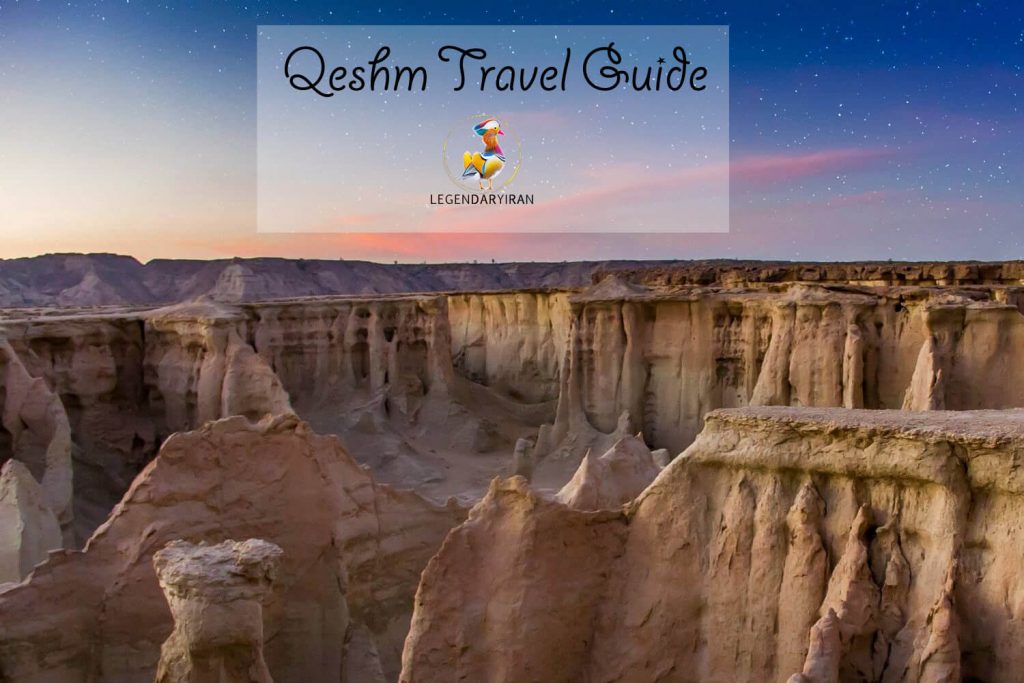 Welcome to Qeshm Island, the island of seven wonders. Here is an ultimate Qeshm Island travel guide where you can find all essential information about how to travel to Qeshm Island and what to do in this must-see Iran destination.

Qeshm at a Glance

The biggest island of the Persian Gulf, located in the Strait of Hormuz in the south of Iran

With a population of over 150,000 inhabitants

Houses Qeshm Global Geopark with the area of 2063 square kilometres

With the distance about 30 km from Bandar Abbas Port

Qeshm is the biggest island of the Persian Gulf located in the Strait of Hormuz in the south of Iran. It also lies in the vicinity of Kish Island. Notably, Qeshm, its smaller islands, and Kish are in the trade free zone of the country. Hence, foreign tourists can travel to these islands without getting an Iran visa.

Interestingly, this island houses Qeshm Global Geopark with an area of 2063 square kilometers.  This geopark is one of the most prominent ones in the Middle East and West Asia.

Getting information about the destination’s history, especially a historic destination like Iran, is essential for every tourist. Hence, in this Qeshm Island Travel Guide, we present a brief introduction to Qeshm Island History.

Evidence from excavations indicates that the beginning of living on the coast of Iran dates back to about 400,000 years BC. At first, the inhabitants of the island were all fishermen. Afterward, During the Medes time, the people started livestock breeding and raising animals besides fishing. Time went by, and Qeshm Island was secured against the invasion regarding its natural barrier of water. Until in the 16th century, the Portuguese invaded Hormuz and Qeshm Islands and built their castles and fortress on these islands. Accordingly, you can see the remains of these castles in this region. Finally, in the 17th century, the Iranian army overthrew the Portuguese, and their domination of the Gulf ended.

On the other hand, in one of the hot spots of the earth, the island dwellers have applied unique architecture to avoid the heat. They constructed adobe domed roofs and windcatchers. Also, to gain and save precious water, the locals used water reservoirs and wells. In other words, Qeshm Island is the living evidence of human’s adaption to nature.

Interestingly, Qeshm Island is the sister city to the Italian commune of Vimodrone, in the Milan Province.

Where to Stay in Qeshm?

How to Get to Qeshm

On the other hand, if you want to transfer your car to the island, you should go to Bandar-e Pol Port. There, you should load your vehicle on a landing craft (car ferry) and get to Qeshm Island on the same ship. Please note that the landing craft journey takes longer, and you will enter Qeshm through Loft Port. Finally, to transfer a  foreign car, you should have Carnet de Passage.

Travel to Qeshm
by Ferry

You can travel to Qeshm Island through the International Airport of Qeshm. This airport covers some international flights from/to Dubai and Muscat.

On the other hand, there are numerous domestic flights between Qeshm Island and important Iran cities, including Tehran, Mashhad, Shiraz, Isfahan, Rasht, Tabriz, etc. Besides, you can fly to Bandar Abbas from the other cities, and from there, you can go to Qeshm by boat. Moreover,  Please note that Qeshm is in the free trade zone. If you fly to this island directly (without a stop in other cities of Iran), you can enter Qeshm Island without an Iran visa.

Finally, note that Qeshm International Airport, located about 20 km from Qeshm City, provides convenient access to the city. Accordingly, you can use a taxi to reach the airport. For your record, driving from the city center to Qeshm airport takes about 25 minutes.

Travel to Qeshm
by Plane

Travel to Qeshm
by Bus

The safest way to travel to Qeshm is a train journey. For this purpose, you should get to Bandar Abbas by train and then depart there, toward Qeshm or Hurmoz Island on a boat.

Accordingly, you can travel to Bandar Abbas from numerous Iran cities by train in different classes, from the standard class to a 5-star one. The Bandar Abbas train covers the routes to Tehran, Mashhad, Isfahan, Yazd, etc.

Travel to Qeshm
By Train

Main motorways connect the southern coast of Iran to the other cities. So, many passengers choose to travel in a private car as its schedule is flexible and is faster and more convenient than bus and train. For this purpose, you should get to Bandar Abbas and then go to Qeshm Island by boat.

Travel to Qeshm
By Car 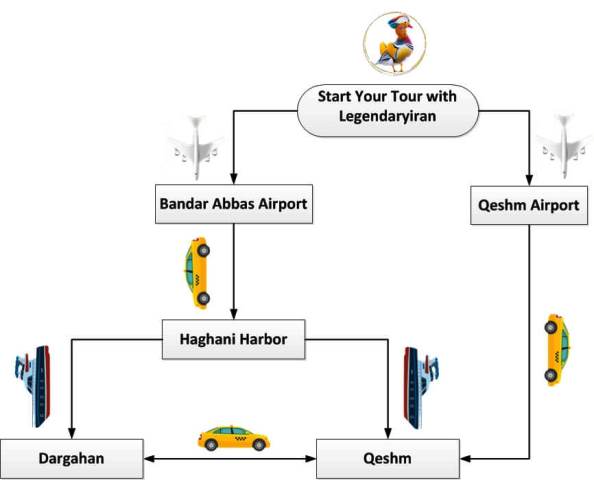 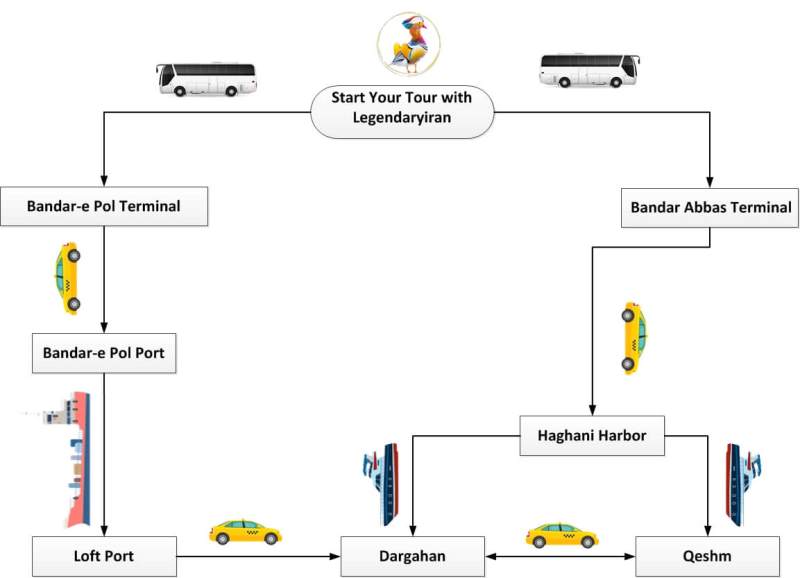 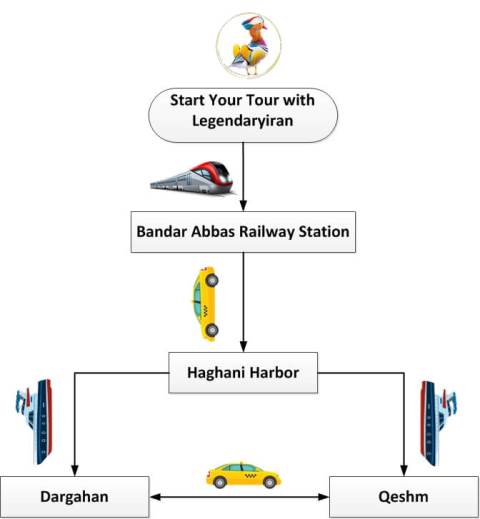 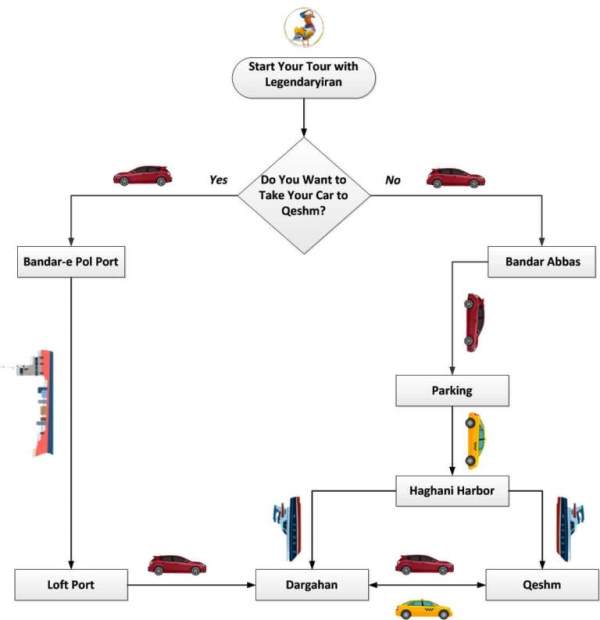 What Do You Know about Qeshm Attractions?

How to Move around Qeshm

Since Qeshm is a vast Island (about 150 km from east to west), its attractions are scattered in different parts of the island. So, the information about transportation in Qeshm Island is essential for every tourist. Hence, in this Qeshm Island Travel Guide, we introduce you to different ways to move around Qeshm Island. In any case, you can rent a private car with a driver, or use taxis.

Get around Qeshm in Taxi

You can get around Qeshm Island in a taxi and visit its attractions. For this purpose, you´d better get the cab from your hotel and ask the hotel´s reception about its fare.

Get around Qeshm in Ferry

Qeshm Island is surrounded by smaller islands including, Hormoz Island, Hengam Island, Larak Island, etc. So you can visit these islands and also Harra Forest by boat. The trip schedule from Qeshm to these destinations is as per below:

Get around Qeshm in Bus

The bus system in Qeshm only covers transportation in the city, and there is no regular transportation to the Qeshm attractions. Hence, the bus can not be a suitable option for sightseeing in Qeshm.

Get around Qeshm in Private Car with Driver

What to Eat in Qeshm?

Where to Eat in Qeshm
Best Restaurants in Qeshm

Near Qeshm Portuguese Castle, Ghale Restaurant, with a castle’s architecture, is located on the Persian Gulf shore.

Locals run this seafood restaurant, and its menu depends on the type of fishes each day, and they are usually ready to serve dinner. The restaurant’s dishes include different kinds of fish, shark, crab, squid, oysters, and shrimp.

Interestingly, if they don’t get proper fishes during the day, they won’t open the restaurant. 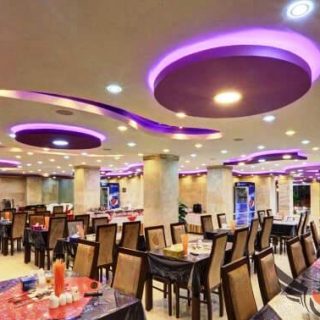 Alvand Restaurant, with its stylish and luxurious design, is one of the famous restaurants on Qeshm Island. Located inside the Alvand Hotel, the restaurant welcomes its guests with a varied menu, including kebabs and seafood. Notably, the seafood mix (a combination of fish fillet and fried shrimp) is one of the best dishes in this restaurant.

Khaleh Restaurant is located near Qeshm Orange Castle. Khaleh (Auntie) is a native who has set up her small restaurant, and her food tastes like homemade food. Khaleh makes tasty samosas and Falafel and also serves seafood. Accordingly, She serves sharks, squid, shrimp and more. Remember that Khaleh restaurant is only open during the evening.