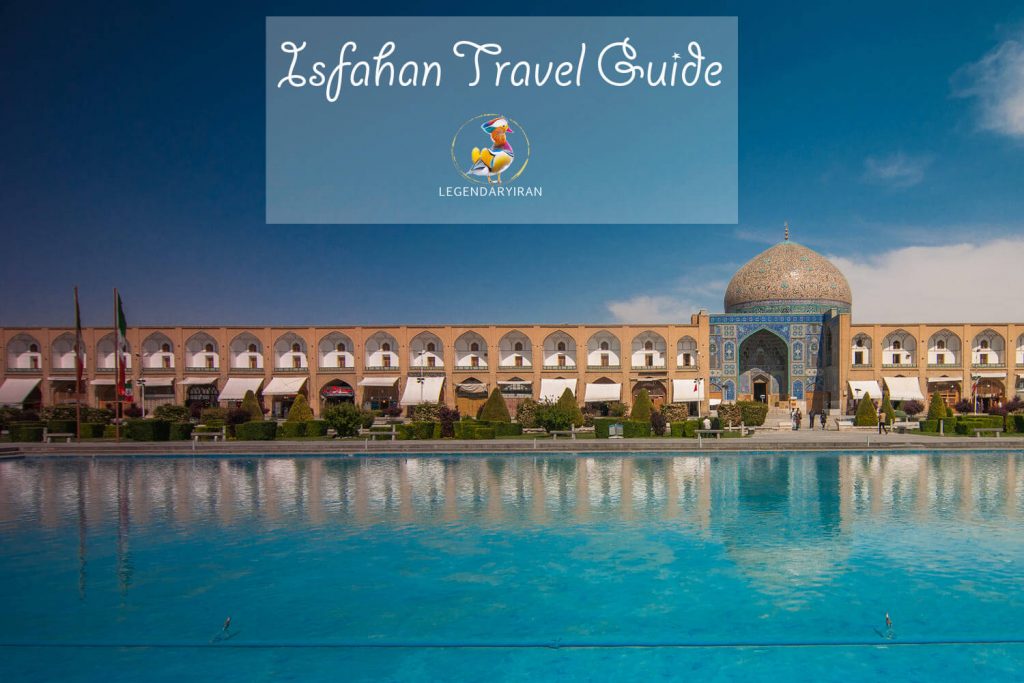 Welcome to Isfahan, Nesf-e Jahan (Half of the World), and the city of the turquoise domes. Here is an ultimate Isfahan travel guide where you can find all essential information about how to travel to Isfahan and what to do in this must-see Iran destination.

Isfahan at a Glance

Famous for its Hand-woven Persian carpets and silver filigree

Famous for Charbagh Street, the sample of Persian Garden

With the altitude of about 1500 m above sea level

Belongs to the third millennium BC

City of the Turquoise Domes

The City of the turquoise domes, where you will see the magnificence of Persian architecture in its stunning mosques and palaces.

The capital of Isfahan Province situated in central Iran, south of Tehran at the foothills of the Zagros mountain range

The first thing to know about a tourist destination is its location. Hence,  in this Isfahan Travel Guide, we present information about Isfahan’s location. Isfahan is the capital of Isfahan Province, located in the center of Iran and in the vicinity of Fars and Yazd Provinces. Moreover, the city is situated in the Zagros Mountains foot. Furthermore, the flying distance between Isfahan and Tehran is equal to 339 km, while its land distance is about 450 km. On the other hand, the land distance between Isfahan and Persepolis, the capitals of Iran during the Achaemenid period, is about 426 km.

Getting information about the destination’s history, especially a historic destination like Iran, is essential for every tourist. Hence, in this Isfahan Travel Guide, we present a brief introduction to Isfahan’s History.

Evidence from excavations indicates that the city of Isfahan dates back to the third millennium BC. “Isfahan” or “Esfahan” was first called Ispahan regarding a nation called Sepahian during the Sasanian Era in that region.

Also, throughout the history of Iran, Isfahan has been chosen as the capital many times. Accordingly, this ancient city was Iran’s capital during the Ziyarid, Buyid, Seljuq, and Safavid dynasties. Mainly, the Safavid Era was the golden Period for Isfahan City. So, you can see the masterpieces of Perso–Islamic architecture, that some of them are Iran UNESCO sites, remained of the Safavid era in Isfahan. As a result, Isfahan houses many historical monuments of Iran and hosts many tourists worldwide.

Where to Stay in Isfahan?

How to Get to Isfahan

You can enter Isfahan through Shahid Beheshti International Airport. This airport covers several international flights from different countries and foreign cities such as Turkey, Dubai, Doha, Baghdad, Kuwait, Al Najaf, and more. And the foreign airlines which have flights to Isfahan International Airport are Qatar Airways, Turkish Airline, Emirates, Air Arabia, Austrian Airline, Fly Dubai, etc. Please mention that with these airlines, you can have connection flights from Isfahan to all over the world and vice versa.

On the other hand, there are many domestic flights between Isfahan and the major cities in Iran every day. And among these flight paths, the routes from Isfahan to Tehran, Mashhad, Shiraz, Tabriz, Kerman, Qeshm Island, Kish Island, Bandar Abbas, Ahvaz, and Rasht are highly demanded by tourists.

Finally, note that Isfahan International Airport, located within 30 km of the city center, has convenient access to the city’s important parts and downtown. Accordingly, you can use a taxi to reach the airport. In short, an internet taxi costs about 500000 rials from the city center to Isfahan airport.

Travel to Isfahan
by Plane

The most economical way to travel to Isfahan is by bus. Also, you can get to Isfahan from almost anywhere in Iran on a bus. Besides, although riding a train is the safest option, many passengers choose the bus because it is faster, and there are plenty of VIP buses from different parts of Iran to Isfahan.

Accordingly, Isfahan has several bus terminals, that the major ones are Sofeh Bus Terminal and Kaveh Bus Terminal located not far from the city center. There are plenty of buses that arrive in/depart these bus terminals from/to different Iran cities from early in the morning until midnight.  Furthermore, since Tehran-Isfahan is the most common route, there are several buses in different classes daily. Noteworthy, you can reach Sofeh and Kaveh Terminals by metro.

Moreover, there is a small bus terminal called Jey Terminal (Terminal J.), which is dedicated to the destinations at the east of Isfahan, including Varzaneh desert, Yazd, and Nain.

Travel to Isfahan
by Bus

You can get to Isfahan from Iran’s main cities by train in different classes from the standard class to a 5-star one. Generally, the Isfahan train covers the routes to Qom, Mashhad, Tehran, Yazd, Tabriz, Ahvaz, etc. Please note that the train journey between Isfahan and Tehran takes about 8 hours.

Finally, Isfahan railway station is located at the southernmost point of the city, and if there is no traffic, you can reach the city center in 30 minutes by taxi. For instance, if you plan to visit Naghsh Jahan Square at the beginning of your trip, you will reach your destination in about 25 to 30 minutes under regular traffic.

Travel to Isfahan
By Train

Main motorways and highways connect Isfahan to all parts of Iran. So, many passengers choose to travel in a private car as its schedule is flexible and is faster and more convenient than bus and train.

Travel to Isfahan
By Car

What Do You Know about Isfahan Attractions?

How to Move around Isfahan

Although most Isfahan points of interest are within walking distance from the city’s old district, the information about transportation in Isfahan is essential for every tourist. Hence, in this Isfahan Travel Guide, we introduce you to different ways to move around Isfahan. In any case, you can rent a private car with a driver, use taxis or public transports such as buses or the metro.

Get around Isfahan in Taxi

You can use internet Taxi called Snapp and TAPSI. These kinds of Taxis work like Uber. So, you can download the application on your phone and easily take an internet taxi within a few minutes wherever you are. Also, you can pay the taxi fee in cash (Rials).

Another option is to get a taxi through a “telephone taxi agency.” These taxis will get you to the destination and also wait for you whenever you want. So, to get this kind of taxi, you can ask your hotel reception or your Iranian friend to do it for you.

Get around Isfahan in Metro

There are also metro lines in Isfahan, which takes you to the city center’s touristic zone, Sofeh Bus Terminal, Kaveh Bus Terminal, Chahar Bagh Street, etc. Notably, the metro system of Isfahan is fast and convenient.

Get around Isfahan in Bus

Honestly, the bus is not a convenient choice for a tourist to get around Isfahan because the bus stations are sometimes confusing for a foreign traveler. However, you can get complete information about your destination station and the bus that you should get from the locals and use this kind of transportation. Notably, there are separate men’s and ladies’ sections on each bus.

Get around Isfahan in Private Car with Driver

What to Eat in Isfahan?

Where to Eat in Isfahan
Best Restaurants in Isfahan

Accordingly, selecting a good restaurant in Isfahan, where there are restaurants on every corner, is very difficult. So, if you want to taste delicious and quality food in the best restaurants in Isfahan during your trip, join us in this Isfahan travel guide. 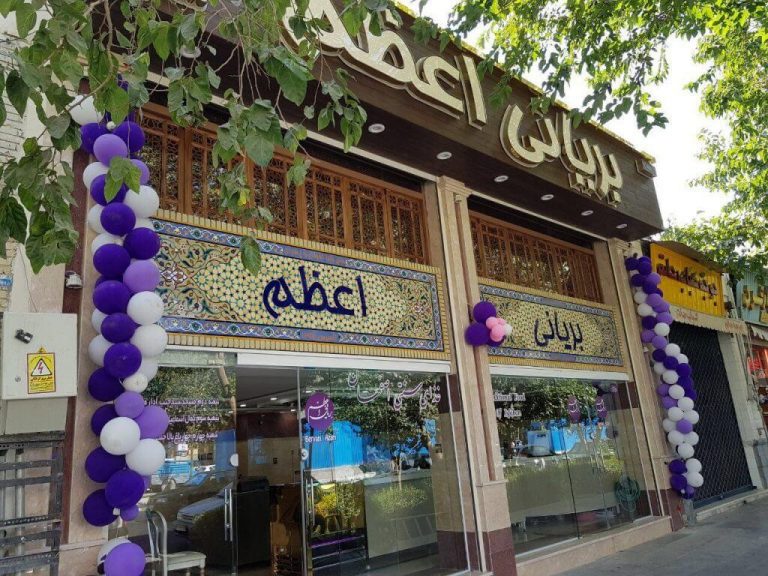 Undoubtedly, one of the famous and traditional dishes of Isfahan is Beryan, and there are various restaurants for Briyani in this city. One of the best and oldest restaurants in Isfahan to try this food is Beryani Azam restaurant.

In this restaurant, Beryan is usually served with Taftoon or Sangak bread, vegetables and Doogh (yogurt drink). Finally, Azam Restaurant has three branches in Isfahan: one at the Darvazeh Dolat, near Chaharbagh Abbasi, the other at Masjed Seyed Street, and the third one at Kamal Esmail Street.

Khan Gostar is the name of a restaurant complex with several branches in Isfahan; One branch is in Isfahan City Center Complex, and the other branch is in Jolfa Hotel in Jolfa district. This restaurant is one of the best restaurants in Isfahan that offers delicious Iranian food in a pleasant atmosphere, excellent service, and luxurious decoration. Among all the restaurant’s dishes, its Chelo Kebab Koobideh is well-known. Besides, Khan Gostar Restaurant offers a variety of salads and vegetarian food for vegetarians.

Shahrzad Restaurant is one of the oldest, best, and most famous restaurants in Isfahan and has become very popular among tourists. This restaurant is popular for many reasons, including delicious and quality Iranian food, colorful tiles, and Qajarid paintings in interior decoration. Its excellent location in Chaharbagh Abbasi is close to famous sights Khajou Bridge, Zayandehrud, etc.