Iran is a year-round destination, and deciding when to travel to this country can be difficult. Choosing the best time to visit Iran is usually based on the weather, but you can also arrange your trip around one of the annual events or festivals in Iran.

In addition to celebrating Iran’s rich culture, some Persian festivals are inspired by the agricultural calendar, while many are religious events.

By the way, all Iranian festivals provide an authentic glimpse into the everyday lives and beliefs of the Iranians.

Here, we look at the top 10 festivals in Iran, from the Persian New Year to religious ceremonies based on the Arabic calendar. Also, we express where and when to visit these festivals in Iran.

Check the Persian Holidays in 2022 in the below calendar.

Saffron is a magical spice in Persian culture extracted from the Crocus flower. Interestingly, 95% of the world’s saffron comes from Iran. The best Iranian saffron is cultivated in Khorasan’s arid lands in the northeast of the country. It is also produced in the Fars Province.

When the purple flowers of saffron cover the farms, the harvest time starts. The saffron harvest season begins in early November and takes about three weeks.

To harvest saffron, the farmers pick the flowers by hand from before sunrise until a short time after sunrise. Then they transfer the flowers to a roofed place to separate the stigmas from the flowers. They take out all the stigmas carefully by hand and let them dry.

Tourists from around the world visit Iran’s saffron farms during November to participate in the saffron harvesting festival in Iran. You can also be a part of this process and help the farmers in saffron harvesting.

Besides, handicrafts, natural products, local food, and souvenirs are displayed during this Persian festival. 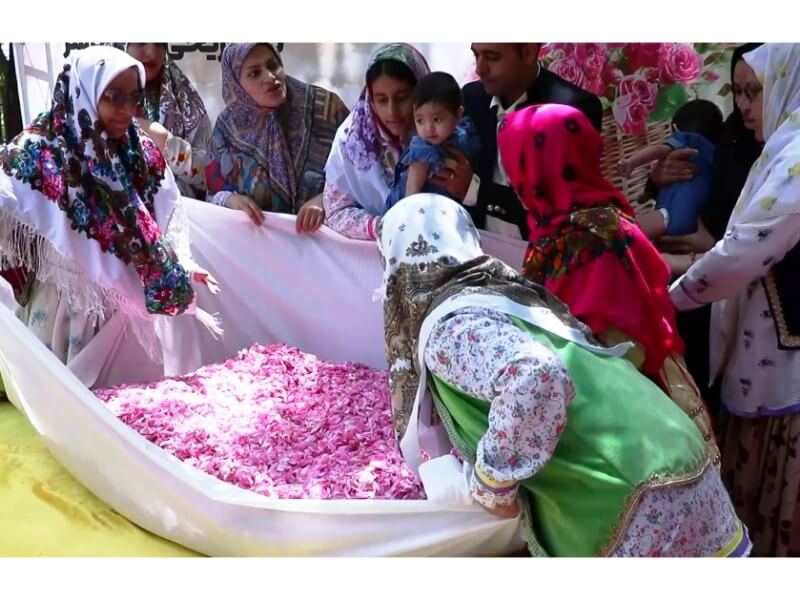 Golabgiri or Rose Water Festival is a seasonal and famous festival in one of the must-see Iran destinations, Kashan.

This unique Iranian festival is held annually from mid-May to mid-June in nearby Kashan, such as Qamsar and Niasar. Notably, the best rose water from Qamsar (located 30 kilometers from Kashan) is absolutely unrivaled.

Niasar is another region 30 kilometers west of Kashan famous for its historical and natural attractions besides the Golabgiri festival.

The rose used to make rose water is the Mohammadi flower (Damask rose), which is native to Iran. Since the Achaemenid Dynasty, Iranians have cultivated this flower. Nature and culture come together in the rose water ceremony in Iran.

You need a day to participate in this Persian festival. The farmers pick the flowers early in the morning, then by performing a ceremony such as reciting religious prayers, they pour the flowers into special pots for extracting the oil and fragrance. The process of obtaining rose water takes about 4 hours.

In the meantime, you can see other exciting ceremonies such as Gol Ghaltan (rolling the baby in flowers to prevent allergies) and preparing jams, syrups, and sweets from rose and rose water.

Another important festival in Iran is Arbaeen, the Arabic word that translates to “forty.” It is held forty days after Ashura (when Imam Hossein, a descendant of the Prophet Mohammad, was murdered).

Arbaeen is one of the prominent religious events in the Arabic (Muslim) calendar because of its exceptional rituals. Shia Muslims from Islamic countries, including Iranians, hold a yearly ceremony on this day called the Arbaeen pilgrimage of the Arbaeen walk. Accordingly, thousands of Shia Muslims gather in Karbala, Iraq (the burial place of Imam Hossein) at the most significant annual gathering in the Shia world. They walk hundreds of kilometers from their cities and countries to the Tomb of Imam Hussein to show their love and respect for their religious leader.

Please note that many tourist attractions in Iran are closed on Arbaeen day.

Tasua and Ashura Festivals in Iran 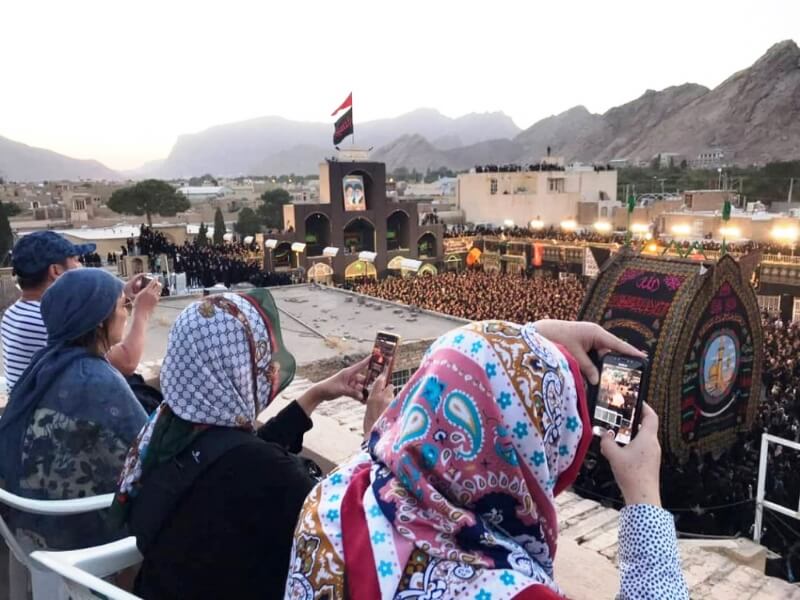 The month of Muharram is the first Islamic month of the Islamic calendar, in which Imam Hossein, the Mohammad Prophet’s grandson, was martyred. Accordingly, Tasua and Ashura occur on the ninth and tenth days of Muharram when this tragedy happened. Iranians observe different ceremonies and rituals on these days. Accordingly, thousands of Iranians participate in a march in honor of Imam Hussein. This mourning is the most significant religious festival in Iran. Apart from that, the wealthier residents donate food called “Nazri” to the poor.

In addition to its extensive and profound social and historical impact, this event has become a unique cultural event in Iran.

Notably, these two successive days are holidays on the Persian calendar. Even after Ashura, mourning continues at different times until the following month.

Please note that almost all of Iran’s tourist attractions are closed these two days. 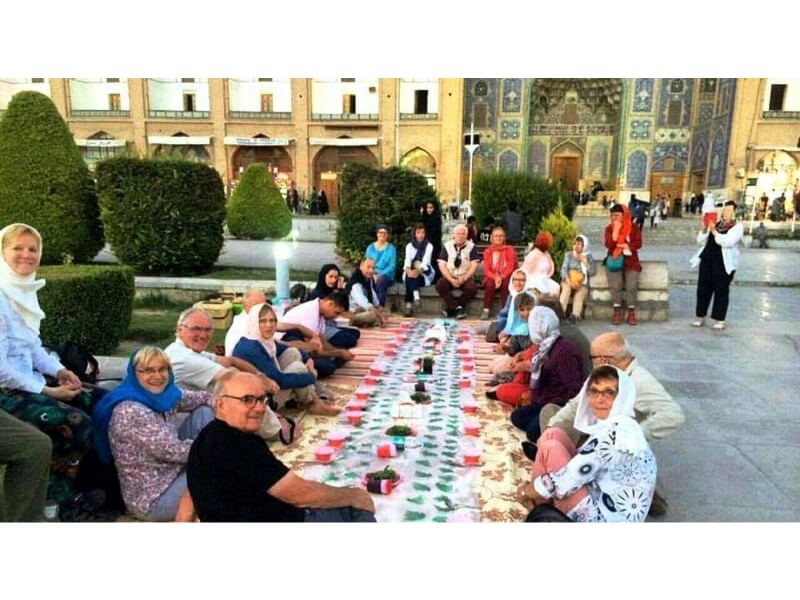 Ramadan or Ramazan (in the Persian language) is the ninth and holy month in the Islamic lunar calendar. During Ramadan, all Muslims, including Iranian Muslims, fast and pray. Actually, they fast for one month from dawn until sunset. In this regard, Muslims eat something at sunrise, then refrain from eating, drinking, smoking, and swimming until sunset. They are allowed to eat, drink, and generally break their fast at sunset (Iftar). This cycle continues until the end of Ramadan.

Ramadan is a significant event in Iran, so Iranians practice fasting and hold several religious and local rituals during this month.

The principal Ramadan traditions and rituals are as per below:

Sahari: Sahur, or Sahari in the Persian language, is the meal Muslims eat before the dawn Adhan (call to prayer). Actually, a day of fasting begins with eating Sahari and praying at dawn.

Iftar: Muslims break their fast with a meal called Iftar or Eftar at sunset.

Nazri: Another Ramadan tradition in Iran is donating free food, called Nazri, to others, especially the poor.

Eyd-e Fetr: Ramadan ends with Eyd-e Fetr, Eid al-Fitr in the Persian language. On this day, known as the “Festival of Breaking the Fast,” Muslims do not fast and celebrate instead.

Sizdah Bedar, known as the Nature Day, is the last Norooz tradition on the thirteenth day of the Persian New Year, i.e., April 1st or 2nd. On Sizdah Bedar, all Iranian spend the whole day exclusively outside the house. Accordingly, they prepare picnic packages and pop into nature. They celebrate the end of Nowruz by dancing, laughing, and eating food together for a whole day.

One of the unique customs of this Iranian ceremony is to leave Sabzeh of the Haft Sin table in running water. Besides, single people tie greens in nature and sing folk poems to find the right pair in the New Year. At sunset, Iranians return home, and Iran’s Nowruz holiday officially ends. 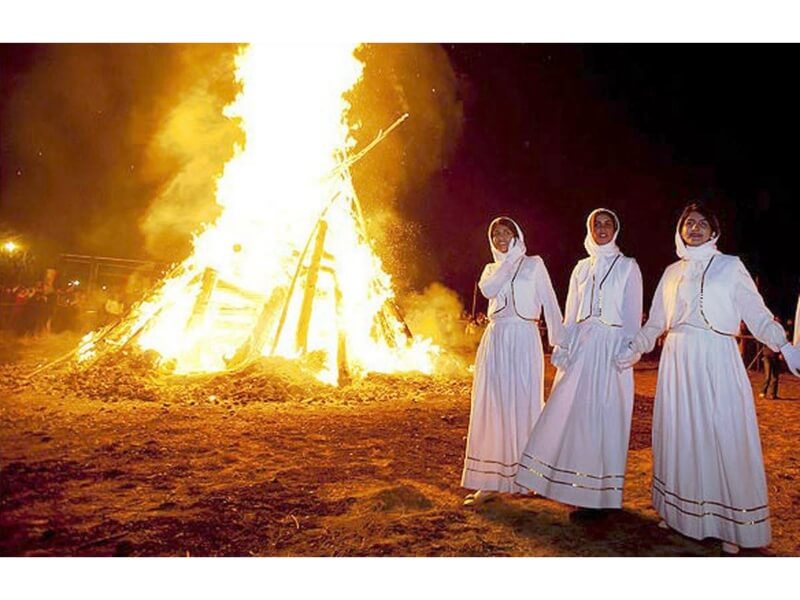 Sadeh is one of the ancient Persian celebrations with a special place among Zoroastrians (ancient religion of Iran). It is held on Bahman 10th based on the Persian calendar (January 30th) and is named after the number one hundred (Sad in Farsi); the event marks 50 days and 50 nights before Nowruz (the Persian new year). According to ancient belief, the peak of the cold has passed on this day, and we are approaching spring. So, Sadeh Festival marks the end of winter and the beginning of spring.

Zoroastrians celebrate this day by lighting a huge fire, chatting with each other, eating snacks, singing, and praying. A celebration of light, fire, and joy would not be complete without empathy and solidarity.

This Iranian festival symbolizes fighting against winter cold and darkness with the light and heat of a great fire. It shows the importance of light, fire, and energy. Historical sources mention it as an ancient and national celebration in Iran, not only as a religious festival. Sade Celebration is also attributed to the creation of fire, which according to Iranian mythology, was discovered by Houshang, the legendary king of Iran.

To participate in this festival in Iran, you should go to Markar Square in Tehran, Dolatabad Garden in Kerman, or the Rahmatabad neighborhood in Yazd. 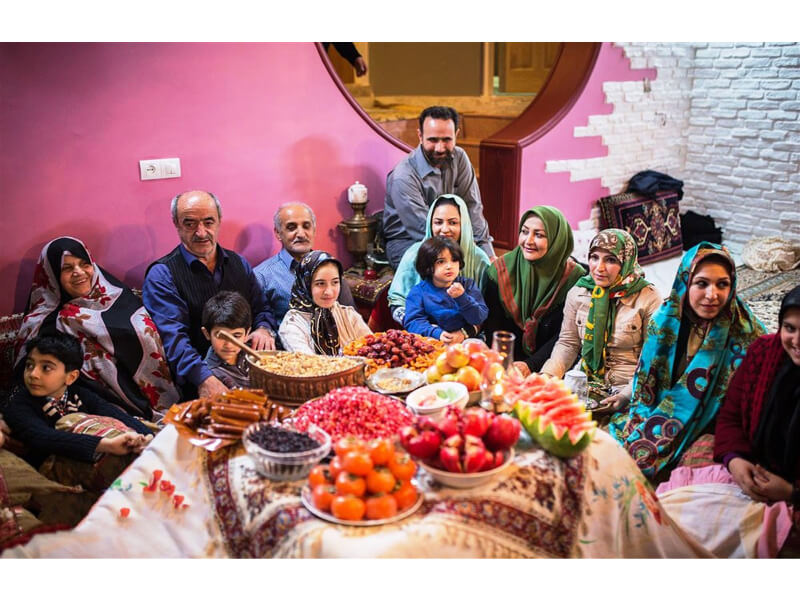 Like Nowruz and Chaharshanbe Suri, Yalda night (Shab-e Yalda, or Shab-e Cheleh) is among the oldest Persian festivals. Yalda night begins at sunset on the last day of fall (December 20th or 21st) and ends at sunrise on the first day of winter. From this date onward, the days gradually become longer and the nights shorter, and this night is the longest of the year. Iranians have celebrated this ancient Persian ceremony since 500 BC. It symbolizes the end of darkness and the beginning of the light, or victory of goodness over evilness. 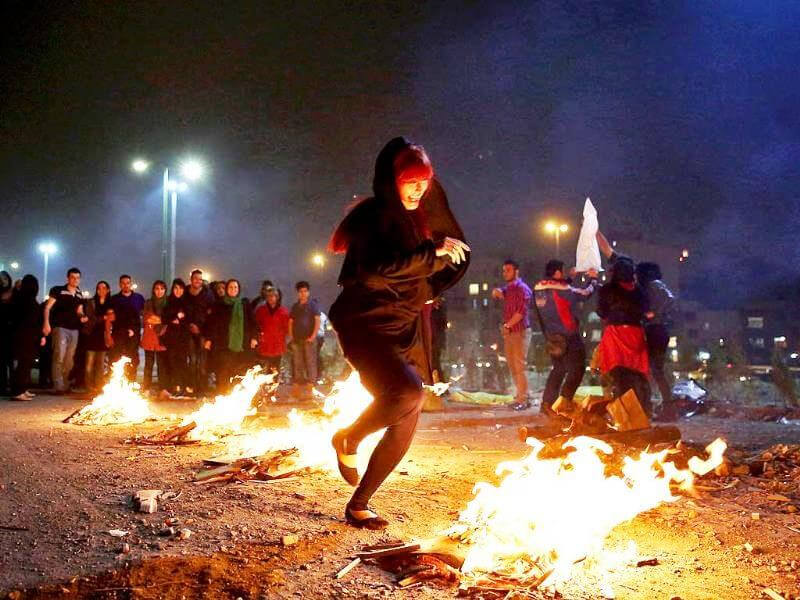 One of the most significant festivals in Iran is Chaharshanbe Suri (or Iranian Fire Festival), which is held on the last Wednesday (Tuesday night) of the year. It is one of the first celebrations of Nowruz (Persian New Year).

Chaharshanbe Suri is composed of two words: “Chaharshanbe” (referring to the last Wednesday of the Persian year) and “Suri” (referring to light). In Iran, jumping over a fire during the Charshanbe Soori ceremony brings good health and fortune to the participants.

Accordingly, they light big and small fires in the streets and alleys and jump over them while singing folklore songs.

The Persian new year (Eid Norooz), or Nowruz, which means “New Day,” occurs on March 20th or 21st, the first day of the spring season. Iranians have celebrated this festival since 3000 years ago, the most important Persian celebration originating from ancient times. Additionally, Nowruz is one of the longest Persian Festivals, with various Iranian traditions lasting nearly three weeks.

In 2009, Nowruz was inscribed on the World Intangible Heritage List. It was extended in 2016 to the Representative List of the Intangible Cultural Heritage of Humanity, initiated by Iran, Afghanistan, Tajikistan, Azerbaijan, Kazakhstan, Kyrgyzstan, Iraq, Uzbekistan, Turkmenistan, Turkey, Pakistan, and India.

Details about Top Festivals in Iran

In the tables below, you can find information about the top 10 festivals in Iran, including the subject, ceremonies and traditions, time, and place of participation.

Please ask your questions or share your comments about the best festivals in Iran. We appreciate your valuable comments and will also be helpful to others.