Top 10 Most Beautiful Mosques in Iran

The Stunning Mosques in Iran 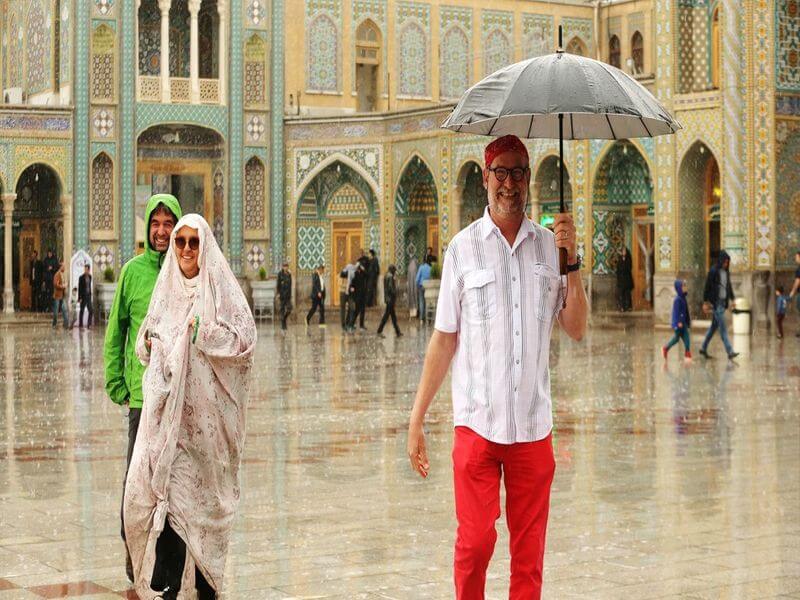 Whether you are a Muslim, just interested in religions, or neither, in any case, the beauty of the mosques in Iran will amaze you. Among Iran’s most popular tourist attractions, Iranian mosques are unparalleled in architectural elegance, beauty, and art.

In the world, Iranian mosques are known for the beautiful combination of color, light, delicate art, and magnificent architectural designs that makes them exceptional. So, let’s explore the Top 10 most beautiful mosques in Iran with information about opening hours and entrance fees. But first, we take a look at the important notes about visiting mosques in Iran.

Besides, if you have any questions about Iranian mosques, do not hesitate to contact us.

Na'in Jameh Mosque, One of the Oldest Mosques in Iran 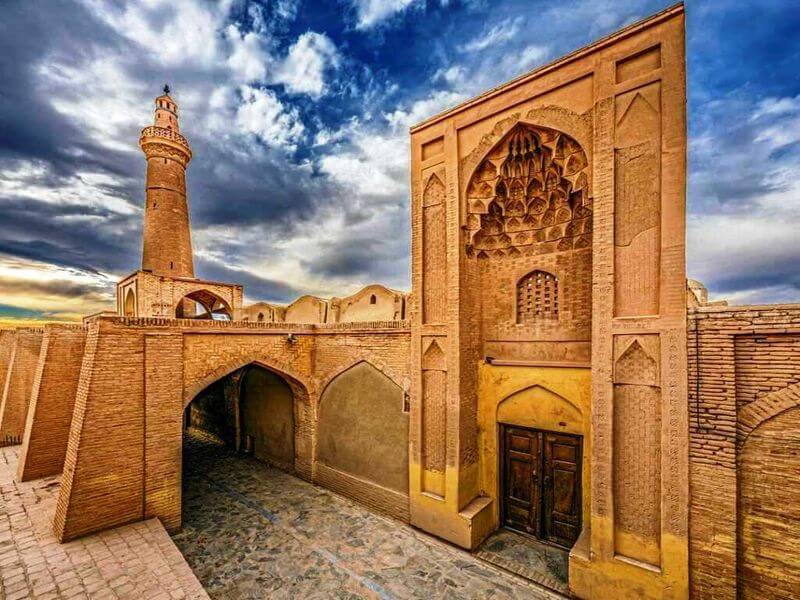 Na’in Jameh Mosque is located in the historical context of Na’in town near Isfahan. The Na’in Jameh Mosque is one of the oldest mosques in Iran that dates back to about 12 centuries ago, but the exact year of its construction is unknown. Of course, some parts were added to the mosque in later years.

Interestingly, the Na’in Jameh Mosque is a true survival of the Khorasani architectural style. When Genghis Khan and his Mongol army attacked Iran in 1219 and destroyed most of the historic buildings, they did not see this mosque. So this beautiful monument remained to show the glory of Khorasani-style architecture to the world.

Besides, the plaster works of the Na’in Jameh Mosque are spectacular. 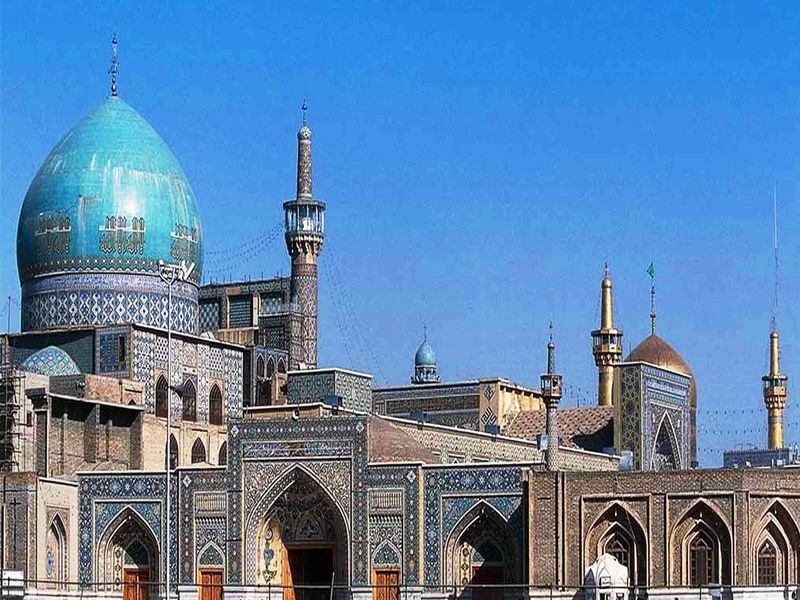 Goharshad Mosque in Mashad shines with its unique architecture among the most beautiful mosques in Iran. This 600-year-old mosque was built by order of Goharshad Khatoon, the wife of the Timurid king. Located in the southern part of Imam Reza Holy Shrine, Goharshad Mosque has both religious and aesthetic significance. It is interesting to know that it has become the most visited mosque in Iran due to being next to Imam Reza Shrine.

Moreover, Goharshad Mosque is a four-Iwan mosque; its courtyard is almost square, and four large porches are located on its four sides. Among the porches, the magnificent naves of the mosque can be seen. Notably, its beautiful decorations have turned this mosque into an artistic masterpiece. The prominent arts that can be seen in every corner are woodcarving, tiling, calligraphy, muqarnas, engraving on marble, etc.

Kabood Mosque in Tabriz, Turquoise of the Islamic World 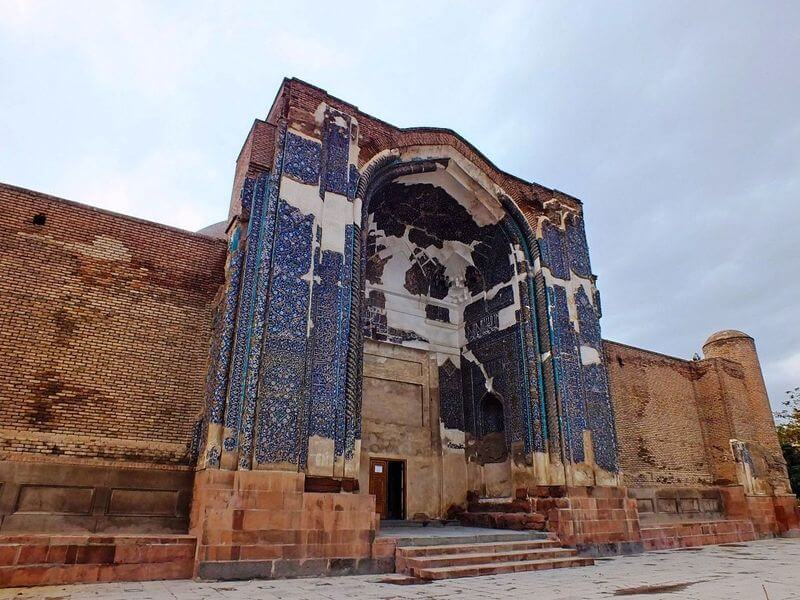 Kabood Mosque, or the Blue Mosque of Tabriz, dating back to the 15th century, is one of the masterpieces of Iranian architecture.  Although unfortunately, many parts of this mosque have been destroyed in recent years, the art of Iranian architects can still be seen in this monument.

Interestingly, Kabood Mosque is one of the four mosques decorated with blue tiles in the world. Accordingly, the name Kabud or Blue Mosque has been chosen based on the color of the facade. The harmony of colors in the exterior and interior decorations of the mosque is one of the prominent features of the Blue Mosque. Azure tiles can be seen in different parts of the mosque, and most of them are hexagonal. Notably, Kabood Mosque is called the “Turquoise of the Islamic World” due to its beauty and the color of its tiles.

Brickwork, turquoise and azure mosaic tiles, Islamic motifs, and modern geometric design are some of the prominent features in the architecture of Kabud Mosque. Interestingly, in terms of architecture and decorations, the Blue Mosque in Tabriz resembles the Goharshad Mosque in Mashhad. 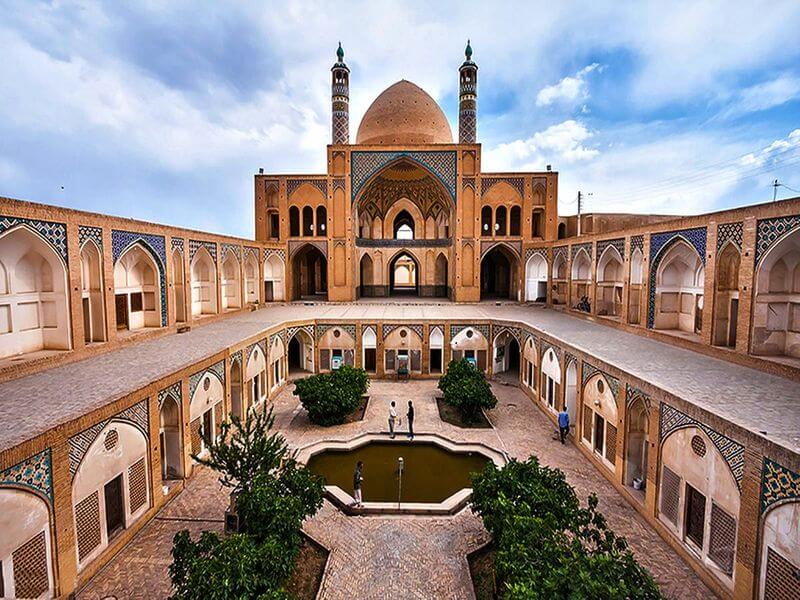 Visit the tallest Qajar dome in the Agha Bozorg Mosque in Kashan! The five-story Agha Bozorg School-Mosque with its large brick dome, colorful tile decorations, delicate muqarnas, stunning plasterworks, paintings, tiled inscriptions, and woodcarvings is one of the most beautiful mosques in Iran. This stunning Iranian mosque has a relatively symmetrical texture and two exquisite and precious doors with unique woodcarvings that are located at the mosque’s main entrance.

Interestingly, this building has two functions: a religious school on the lower floor and a mosque on the upper floor; both are located around a central courtyard.

It is better to visit this mosque around sunset to enjoy its colorful lighting and architectural beauties. 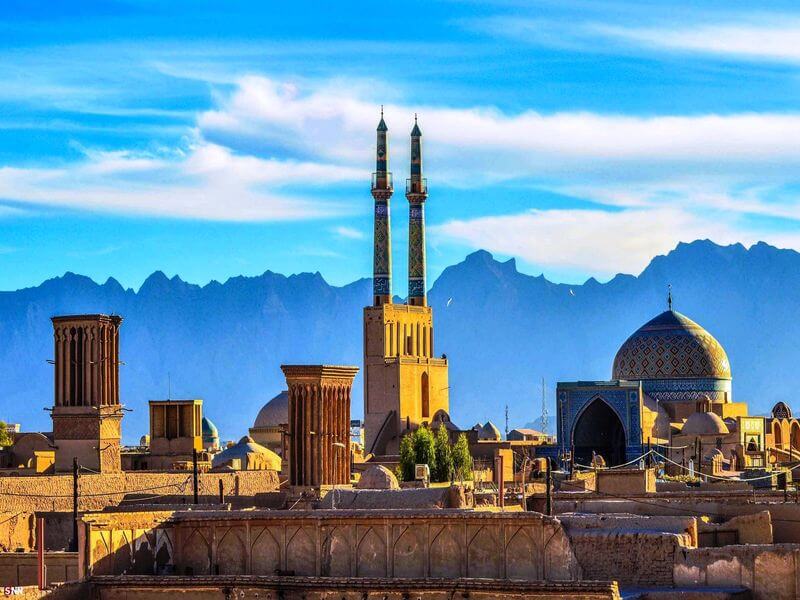 One of the most beautiful mosques in Iran is located in the Fahadan neighborhood in the heart of the historical city of Yazd. The building has the tallest minarets among the Iranian mosques. This beautiful mosque is called Yazd Jame Mosque, or Kabir Mosque.

Jameh Mosque of Yazd, with about 9000 square meters, has a square plan constructed on a Sassanid fire temple. The mosque dates back to Al-Buwayh (934 – 1062), but, over time, other sections were added to the building. Hence, this is one of the oldest mosques in Iran.

Yazd Jameh Mosque consists of different sections such as the main porch, several naves, aqueducts, water wells, library, courtyard, Iwans, and dome, each of which has been designed with artistic elegance. But the most prominent part of this mosque is its minarets, which are the tallest minarets among Iranian mosques, with a height of about 52 meters. In terms of decoration, the tile works of Yazd Grand Mosque are exceptional. 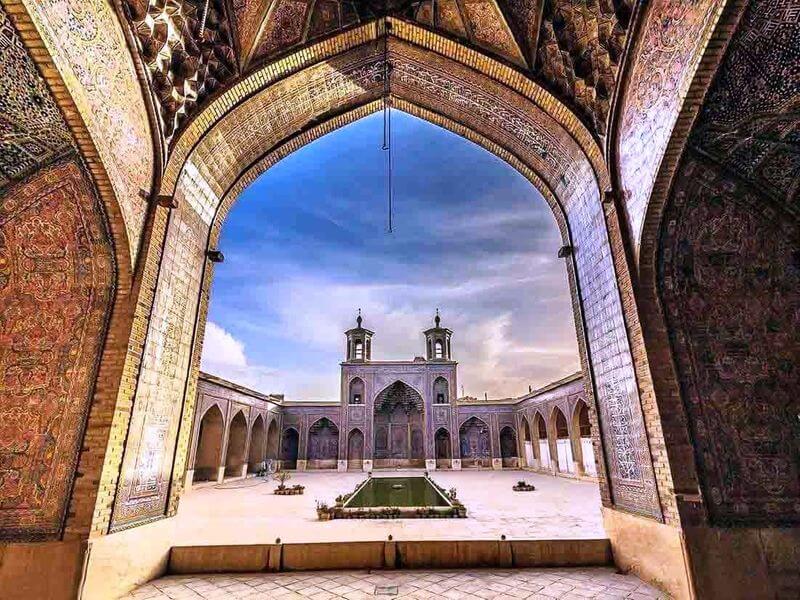 Vakil Mosque in Shiraz is one of the most beautiful mosques in Iran, a mosque with carved and regular stone columns that have created a mysterious atmosphere in its nave. It is located in Shiraz Vakil Bazaar and belongs to the Zandieh era, more than 250 years ago.

The artistic tiling of the nave’s arch with azure tiles and Quranic verses and the magnificent marble altar are only a few examples of the superb decorations of the Vakil Mosque.

The mosque also has a central courtyard with two Ivans on the north and south with seven-colored tiles that dazzle the eyes. The 20-meter high arch of the north Ivan called Pearl Arch is the most beautiful part of this section. You can see painted stone plinths on the porch that have created an excellent combination with the seven-color tiles and floral motifs. 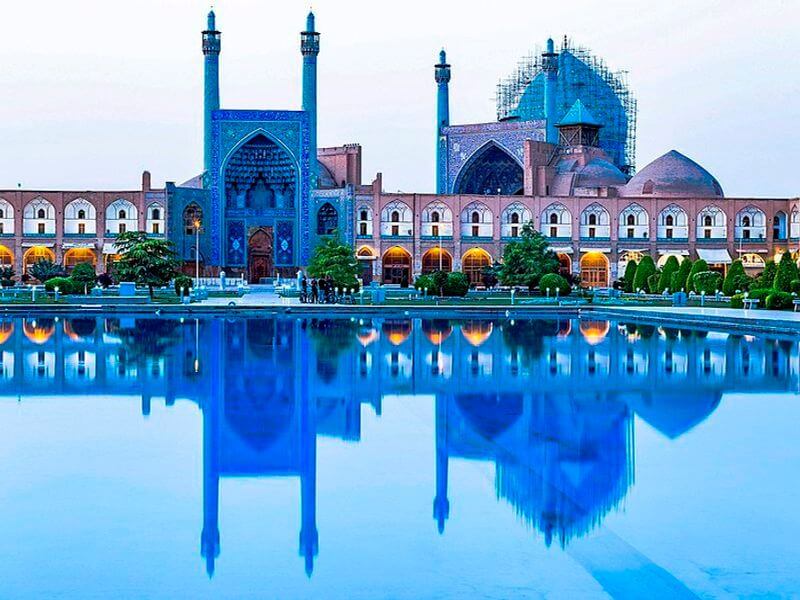 It is impossible to travel to Isfahan and not visit Shah Abbas Mosque! This mosque, located in Naghsh-e Jahan Square in Isfahan, shines among the tourist attractions of Isfahan and is a UNESCO registered site. It was constructed during the Safavid era, i.e., more than 400 years ago.

Shah Mosque can be considered one of the most famous examples of Iranian-Islamic architecture. In other words, it is the result of a thousand years of mosque building art in Iran. You cannot stop admiring the unique muqarnas, stunning seven-color tilework, valuable inscriptions, arches, porches, and the large pond in the middle of the courtyard.

Further, under the magnificent dome of Shah Mosque, which shines like a turquoise jewel in Isfahan’s historical context, there is a point where sound is reflected, which is an impressive feature. 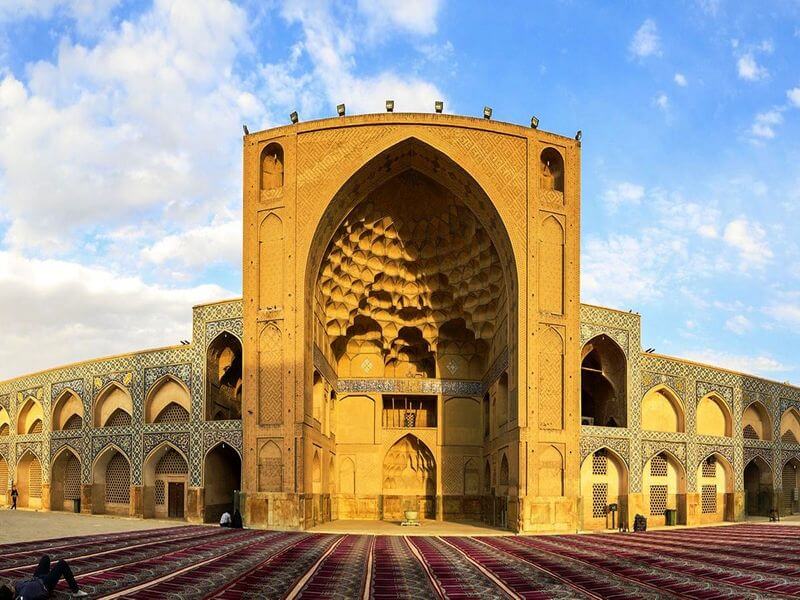 Isfahan Jameh Mosque is a historical mosque in the old part of Isfahan at the end of the Grand Bazaar, also called the Atigh Mosque and the Friday Mosque of Isfahan. The mosque dates from about 1300 years ago, and it has undergone numerous renovations and constructions to reach its current appearance. Consequently, each of its parts displays the development and evolution of Iranian architectural art in different periods. In other words, the Jameh Mosque is like a canvas painted by artists from every historical period of Iran.

This mosque is also known as the oldest monument in Isfahan, and there are many narrations about its history. Also, like many old mosques in Iran, Isfahan Atigh Mosque is built in the style of four porches, and its artistic decorations dazzle your eyes. The beautiful altar of Öljaitü itself, like a precious painting, shows the art of its creators.

Mosque splendor and the spiritual atmosphere of the naves create a unique mood that can only be experienced in person. This monument was also inscribed on the UNESCO World Heritage List in 2012. 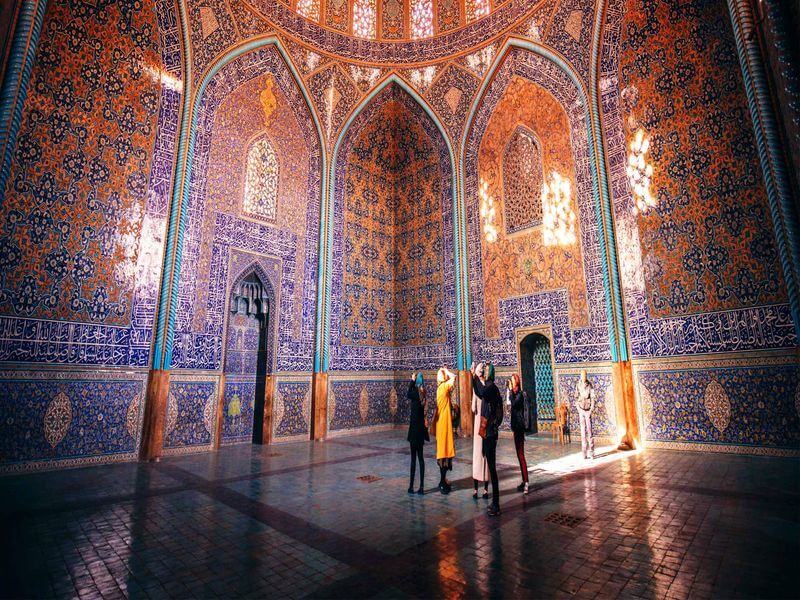 Sheikh Lotfollah Mosque is another beautiful mosque in Isfahan, located in Naghsh-e Jahan Square, a UNESCO World Heritage Site. This mosque was built during the reign of Shah Abbas I between 1603 and 1619 and today is known as one of the most beautiful mosques in Iran. The interior and exterior of the mosque are decorated with thousands of colorful tiles. Also, the yellow motifs adorning the walls and ceilings of the mosque present a magnificent example of Iranian architecture.

Moreover, the exterior design of Sheikh Lotfollah Mosque in Isfahan has a collection of floral motifs, which is a unique masterpiece of art and design. Also, blue and yellow motifs have been used to decorate the doors and windows.

Notably, this mosque is famous for its beautiful dome in which delicate tiles in cream and pea colors are used. Interestingly, the color of the dome changes from cream to pink during the day. Some say that sunset is the best time to observe this color change. 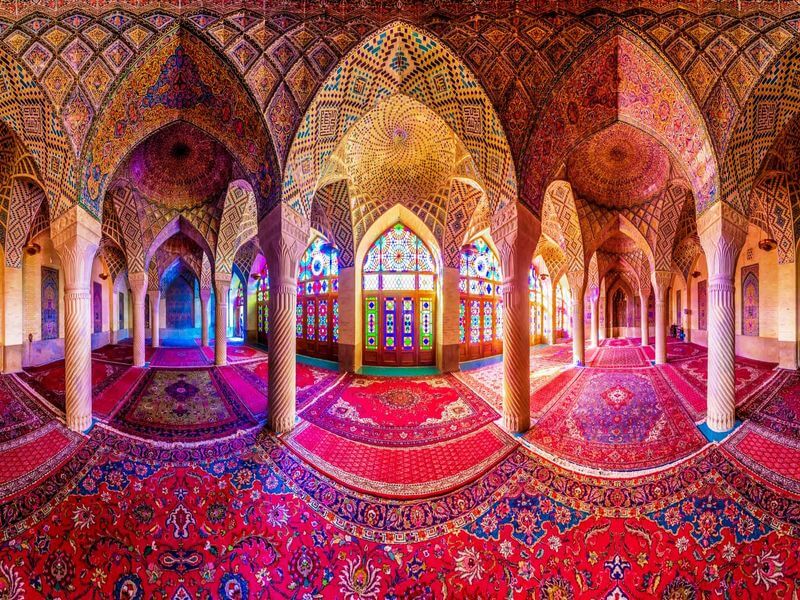 Nasir Al-Molk Mosque in Shiraz, with its play of color and light, is famous worldwide. This mosque is located in the city’s historical context on the south of Karim Khan Zand Street in Shiraz and was built by Mirza Hassan Ali Khan-e Nasir Al-Molk, one of the nobles of Shiraz during the Qajar Period (1789-1925). The construction process of this spectacular mosque took about 12 years.

It is one of the world’s most beautiful mosques due to the use of exquisite decorative elements. Also, because of the pink stained glass and pink tiles in the decoration, this mosque is known as the Iran Pink Mosque.

Notably, visiting Pink Mosque in the early morning hours, when the light comes through stained glass and the colors dance on the carpet, is one of the most memorable experiences you should not miss while traveling to Shiraz.

The table below lists the opening hours and entrance fees of the top 10 mosques in Iran that we introduced above.

Finally, please share any questions or comments you may have regarding the stunning mosques in Iran. We appreciate your valuable comments, and they will also be useful to others.