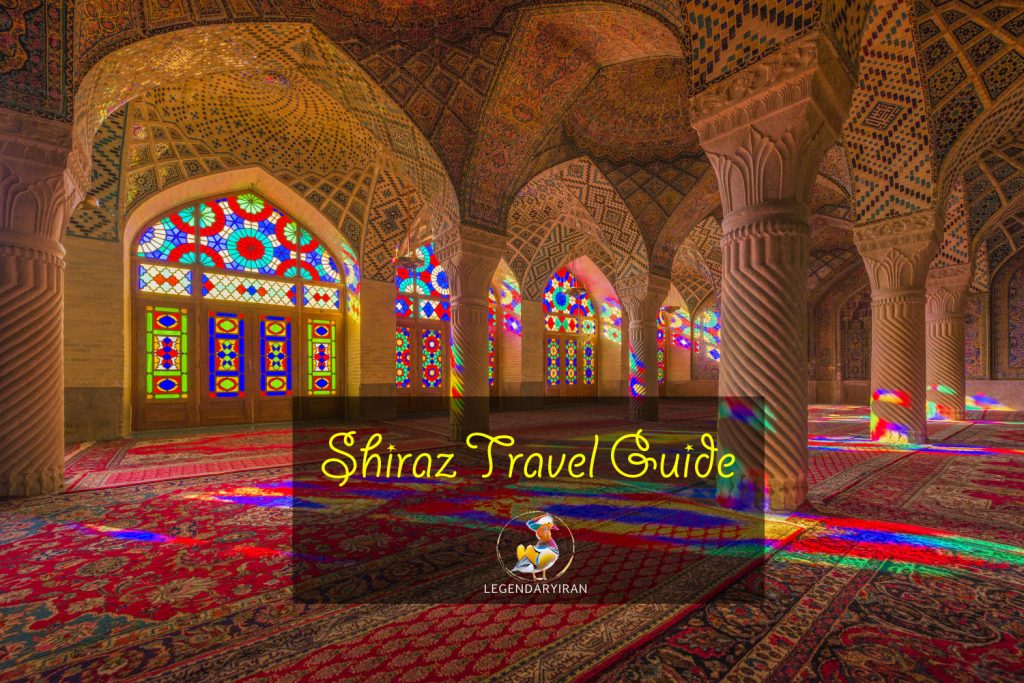 Welcome to Shiraz, the city of love and roses. Here is an ultimate Shiraz travel guide where you can find all essential information about how to travel to Shiraz and what to do in this must-see Iran destination.

Shiraz at a Glance

City of love and literature, where Hafez and Saadi, the famous Persian poets rested in peace

The fifth-largest city in Iran and the home to over 1,5 million inhabitants

Famous for Persian gardens and formerly for its Wine

with the altitude of about 1500m above sea level

Shiraz is the Fars Province Capital located in the south of Iran and the vicinity of Isfahan, Yazd, and Kerman Provinces. Moreover, the city is situated in the Zagros Mountains foot and is the south of Iran’s major city. Furthermore, the flying distance between Shiraz and Tehran is equal to 684 km, while its land distance is about 931 km. On the other hand, the land distance between Shiraz and Bandar Bushehr at the Persian Gulf coast is about 297 km.

Getting information about the destination’s History, especially a historic destination like Iran, is essential for every tourist. Hence, in this Shiraz Travel Guide, we present a brief introduction to Shiraz History.

Evidence from excavations indicates that the city of Shiraz dates back to 6,500 years ago. About 105 years ago, Elamite inscriptions were found in Persepolis, and on some of them, a Shiraz name called “Tizaris” or “Shirazis” exists. Apart from this, the Shiraz name has also been found in other ancient inscriptions.

Throughout the history of Iran, Shiraz has been chosen as the capital many times. Accordingly, Pasargadae and Persepolis, Iran UNESCO sites, were Iran’s capitals during the Achaemenid period. This ancient city was also the capital of Iran during the Buyid, Atabakan-e Fars, Injuids, Muzaffarids, and Zand dynasties. Consequently, Shiraz city and Fars Province house many historical monuments and hosts many tourists from all over the world.

Interestingly, Shiraz’s sister cities are Nicosia in Cyprus, Dushanbe in Tajikistan, Chongqing and Nanjing in China, Weimar in Germany, and Patch in Hungary.

Where to Stay in Shiraz?

How to Get to Shiraz

You can enter Shiraz through Shahid Dastgheyb International Airport. This airport covers international flights from different countries and foreign cities such as Turkey, Dubai, Doha, Sharjah, Kuwait, and Muscat. And the foreign airlines which have flights to Shiraz International Airport are Qatar Airways, Turkish Airline, Salam Air, Air Arabia, and Fly Dubai. OF Course, with these airlines, you can get connection flights from Shiraz to all over the world and vice versa.

On the other hand, there are many domestic flights between Shiraz and the major cities in Iran every day. Among these flight paths, Shiraz routes to Tehran, Mashhad, Isfahan, Tabriz, Kerman, Qeshm Island, Kish Island, Bandar Abbas, Ahvaz, and Rasht are highly demanded by tourists.

Finally, note that Shiraz International Airport has convenient access to the city’s important parts and downtown. Accordingly,  you can use a taxi or metro to reach the airport. For your record, an internet taxi costs about 300000 rials from the city center to Shiraz airport.

Travel to Shiraz
by Plane

The most economical way to travel to Shiraz is by using a bus. You can get to Shiraz from almost anywhere in Iran on a bus. Although riding a train is the safest option, many passengers choose the bus because it is faster, and there are plenty of VIP buses from different parts of Iran to Shiraz.

Moreover, there is a small bus terminal called Ali ibn-e Hamze Terminal near Karandish Terminal that Minibuses to Persepolis depart from there.

Travel to Shiraz
by Bus

You can get to Shiraz from the main cities of Iran, particularly Tehran, by train in different classes from the standard class to the 5-star one. However, usually, the Shiraz train covers the routes to Qom, Mashhad, and Tehran. Notably, you can travel on a night train from Tehran to save some time. Please note that the train journey between Shiraz and Tehran takes about 12-15 hours.

Travel to Shiraz
By Train

Main motorways and highways connect Shiraz to all parts of Iran. So, many passengers choose to travel in a private car as its schedule is flexible and is faster and more convenient than bus and train.

Travel to Shiraz
By Car

What Do You Know about Shiraz Attractions?

How to Move around Shiraz

Although most Shiraz points of interest are within walking distance from the city’s old district, the information about transportation in Shiraz is essential for every tourist. Hence, in this Shiraz Travel Guide, we introduce you to different ways to move around Shiraz. In any case, you can rent a private car with a driver, use taxis or public transports such as bus or metro.

Get around Shiraz in Taxi

You can use the internet Taxi called Snapp and TAPSI. These kinds of Taxis work like Uber. You can download the application on your phone and easily take an internet taxi within a few minutes wherever you are. Also, you can pay the taxi fee in cash (Rials).

Another option is to get a taxi through a “telephone taxi agency.” These taxis will get you to the destination and also wait for you whenever you want. To get this kind of taxi, you can ask your hotel reception or your Iranian friend to do it for you.

Get around Shiraz in Metro

There is also a metro line in Shiraz, which takes you to the city center’s tourist zone. Notably, the trains of Shiraz metro line are clean and not very crowded.

Get around Shiraz in Bus

To be honest, the bus is not a convenient choice for a tourist to get around Shiraz because the bus stations are sometimes confusing for a foreign traveler. However, you can get complete information about your destination station and the bus that you should get from the locals and use this kind of transportation.

Get around Shiraz in Private Car with Driver

What to Eat in Shiraz?

Where to Eat in Shiraz
Best Restaurants in Shiraz

Accordingly, selecting a good restaurant in Shiraz, where there are restaurants on every corner, is very difficult. So, if you want to taste delicious and quality food in the best restaurants in Shiraz during your trip, join us in this Shiraz travel guide.

The luxurious Haft Khan Restaurant is built on seven floors near Quran Gate. In each story, a particular type of food is served, including Iranian, international, barbeque, and fast food. Besides, there is a coffee shop and a souvenir shop in this International restaurant. Interestingly, the decoration of each floor changes according to the type of food served. Moreover, in Haft Khan Restaurant, traditional Iranian bread is cooked in front of your eyes. Also, you can enjoy live music while eating. Hence, don’t miss the experience of eating a delicious dish at this unique restaurant on your trip to Shiraz. 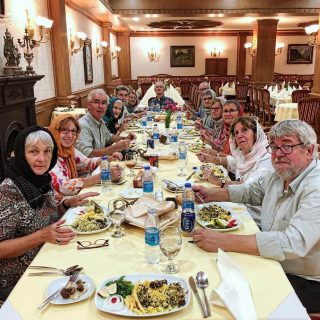 Soofi is the name of a restaurant with several branches in Shiraz; On Sattar Khan Street, Afif Abad Street, and the last one is located near Shah Cheragh Holy Shrine. This restaurant is one of the best restaurants in Shiraz that offers delicious Iranian and international food in a pleasant atmosphere, with excellent service. Some believe that the best “Kalam Polo Shirazi” is served in Soofi Restaurant. 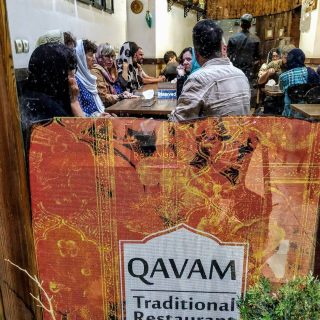 Ghavam is an intimate and affordable Shirazi restaurant that has two branches in Vakil Bazaar and Rudaki Street. The restaurant serves various traditional dishes,  appetizers, chicken wings, a variety of teas, desserts, cakes, and snacks. Finally, the food of Ghavam Restaurant has a unique and unforgettable taste, but you have to be patient to find an empty table.